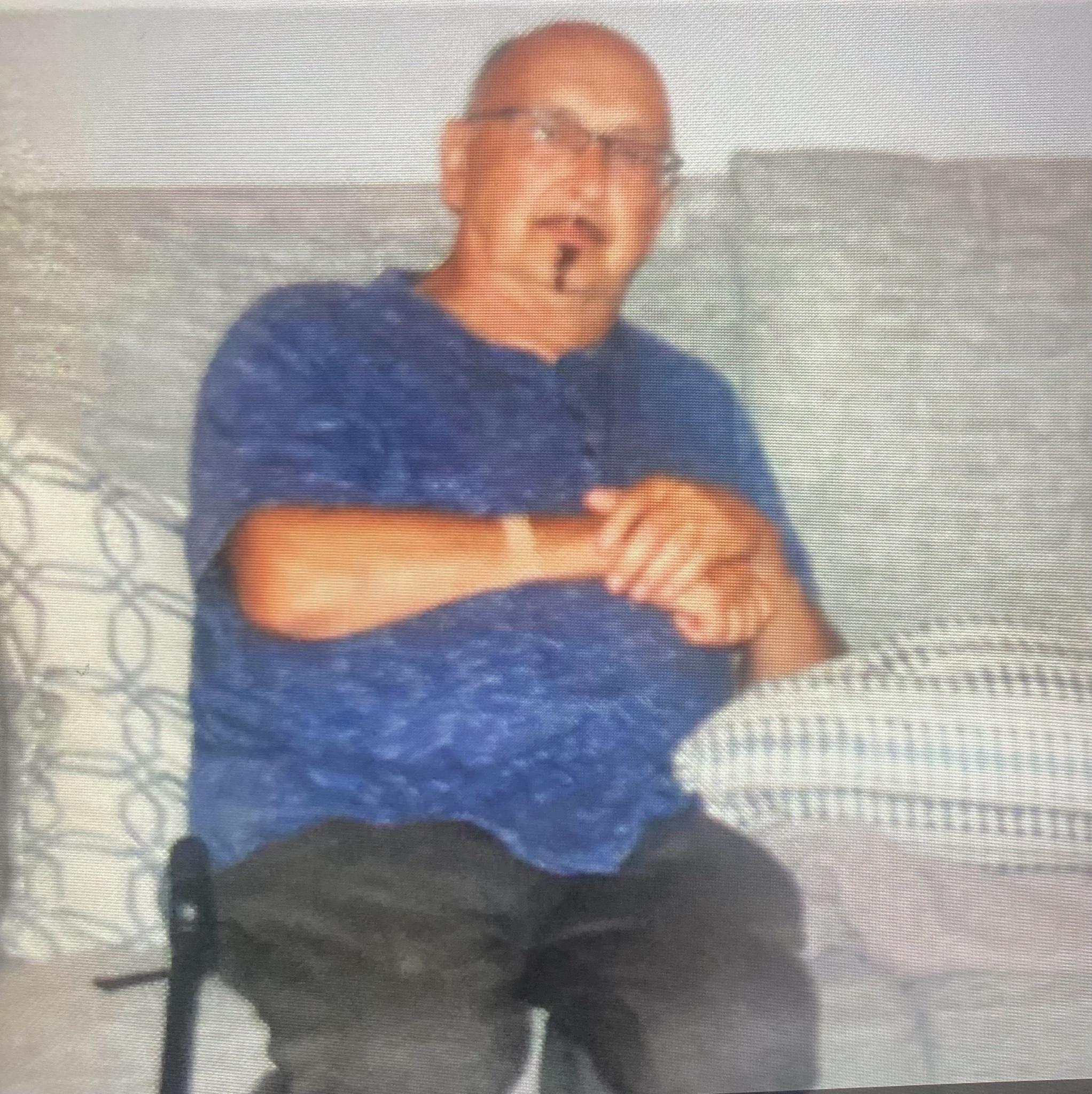 Idaholewis said:
Welcome to the Forum, any questions just ask

Idaholewis said:
Apr 29, 2021
S
Smokepole 61
Member
JoinedMar 23, 2021Messages70Reaction score12Points8
Hello yes it is possible to cast very good long range bullets. If I can do it u sure can. U will need some things like pot heat source etc. U can go cheap at first. Lyman makes a great little kit. With 20 pound pot. Electric. A good mould will cost u more than the kit. U can start out with cheap lyman mould and practice. If u like it get a good mould. Baco makes the ones I use. Look at u tube r on this forum r others. Fellow goes by Idaho Lewis. Watch him shoot 1200 yards. And yes he makes his bullets. As long as your gun doesn't have one of the bullet guiding r quick loading muzzles u should be fine. A faster twist barrel is a must for truly long range shooting. However I have shot 1&48 twist barrels in 50 cal. To 500. U can't use long bullets and it's picky about what u feed it .can be done though. I've done it with 460 grain no excuse bullets and a tc renegade. 50 with 1&48 twist also there old long range hunter barrel. It's fast twist. Lost of custom barrels available. Just about any type of muzzleloader will shoot lead with the proper powder charge it likes. Soft bullets around 1200 to 1350 fish r the easiest to get to shoot for beginners usually. U can run lead much faster but that's more for experienced caster in my humble opinion. Get the things for beginners and have fun. In a couple years you'll be casting and shooting great probably. Just takes time and practice. I don't suggest bullet guiding muzzles r quick load muzzles for this. I pull my hair out with them lol.
Click to expand...

Idaholewis said:
I say my “i Bullet” From Accurate Bullet Molds.

Top 3 Shot group the other day with that Bullet in this same 1:48 Twist TC Renegade

The middle and Bottom Groups were Patched Roundball 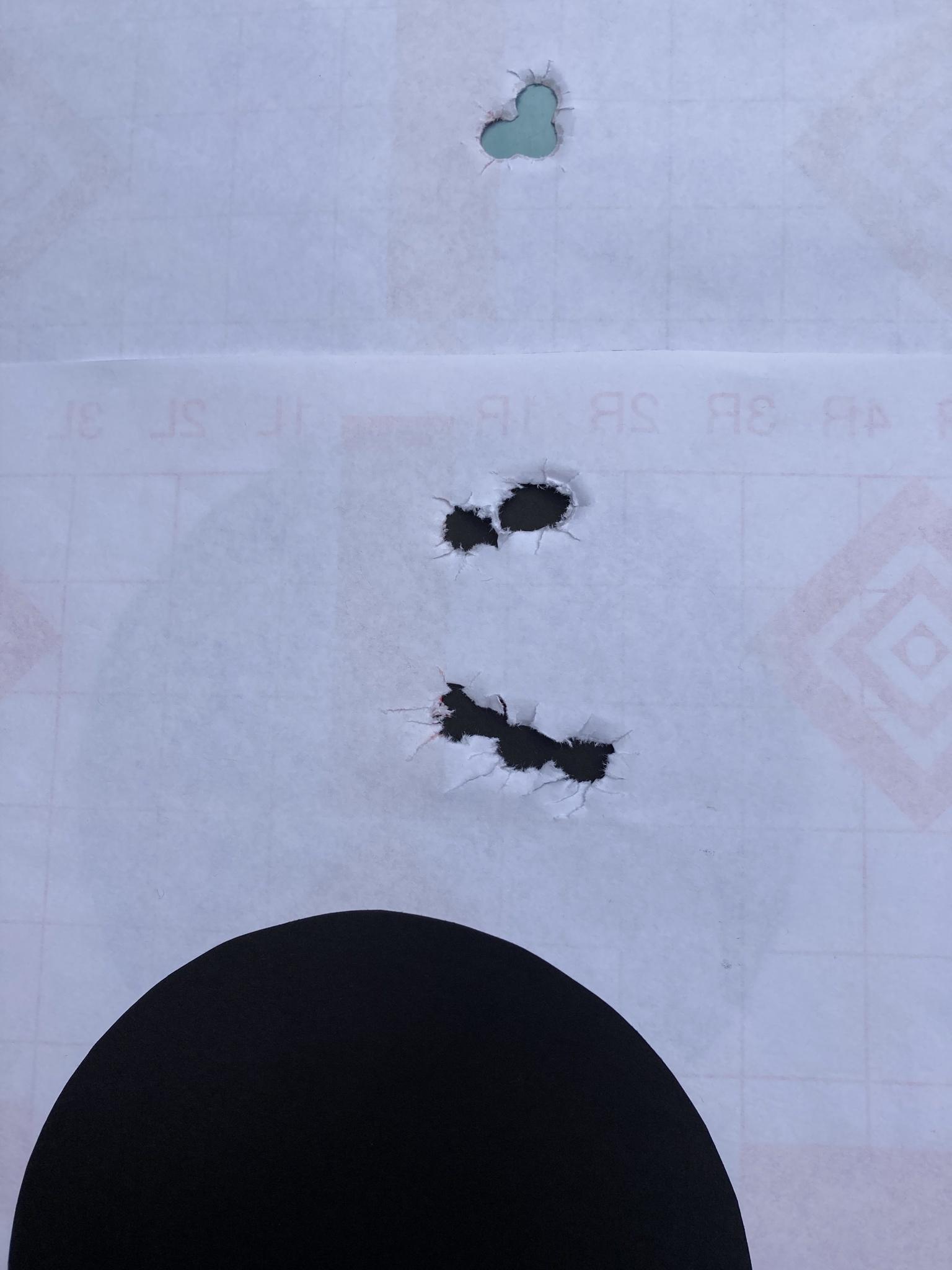 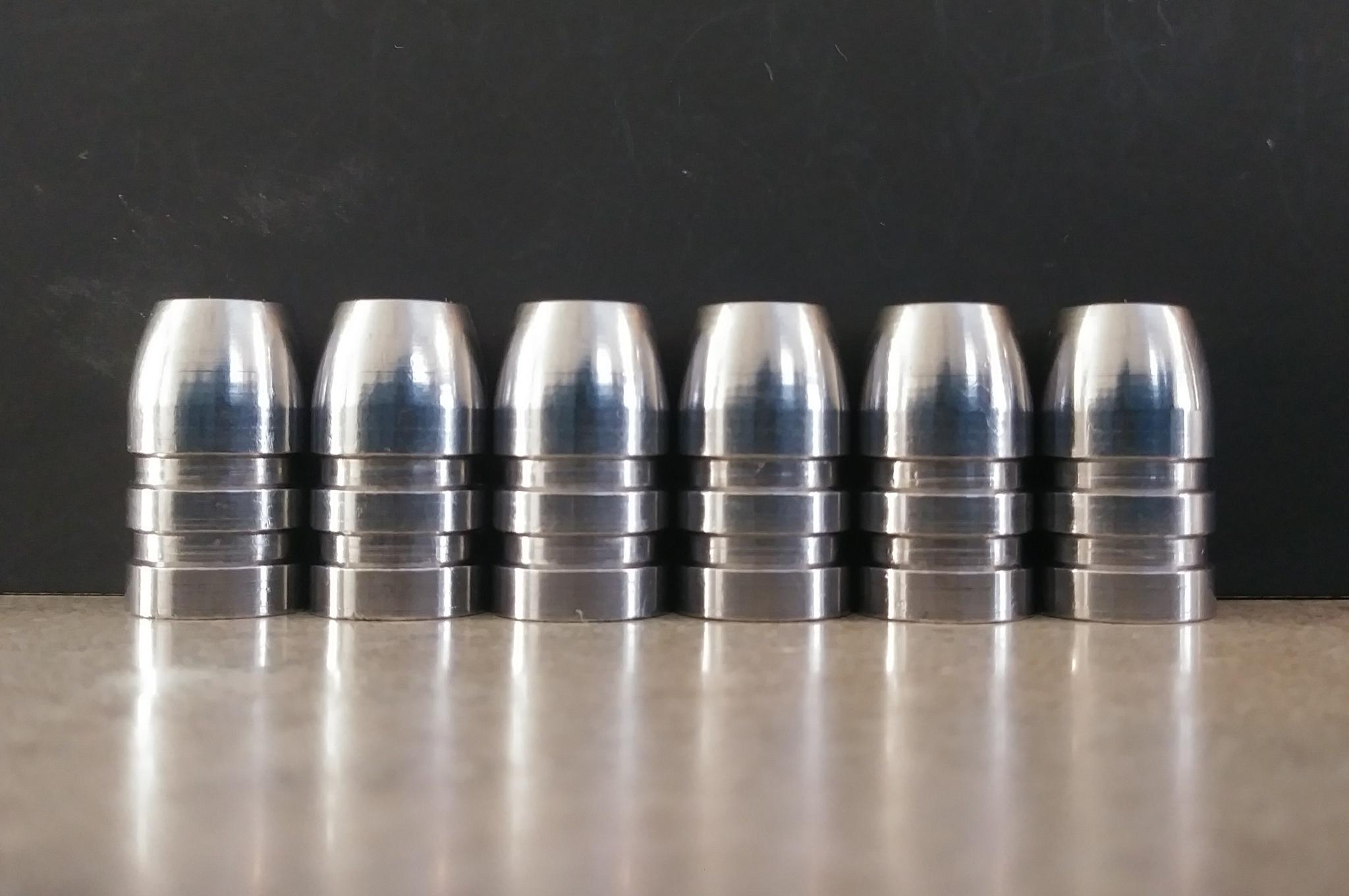 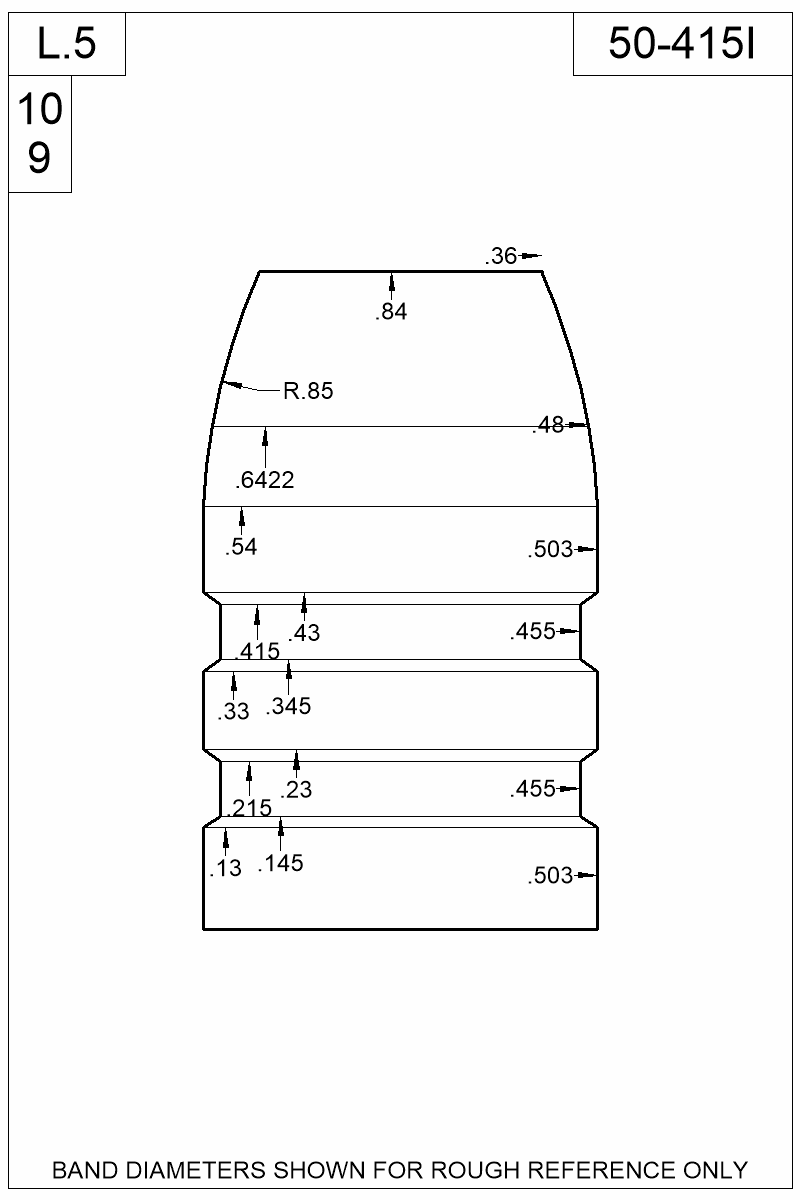 Waters said:
I went to accurate molds website to order what body diameter would you suggest
Click to expand...

I ask because they do on the diameter diagram it's .503 it says rough reference only im wondering what numbers they're asking for

Welcome to the forum waters, lots of info and helpful guys on here…. Mostly….

The diameter is bore size, you’ll want to figure out what size of bore you have. Lewis has a post about how he orders on here, it’s in the bullet casting threads
W

How do I get to those threads bud

Waters said:
How do I get to those threads bud
Click to expand...

Do you guys do any glass bedding to these old cap locks? Is it worth the time or effort?
Last edited by a moderator: Sep 15, 2021

Most probably do not. I have glassed 15/16” barrels into renegade stocks. I have also glassed a 15/16 Hawken barrel into its original stock but the stock was cracked so the glass was part of the repair.
W

Waters said:
Is your bedding the entire length of the stock I'm trying to figure out if I did bed it should I stop the bedding before the wedge and float everything in front of the wedge I just don't know if it's worth my time the fit on mine is a little sloppy
Click to expand...

Generally from the tang to the wedge and then if fitting a smaller barrel to a larger channel a small 1” long pad at the forend tip.

Unless you have a specific problem with accuracy or a cracked stock I really wouldn’t bother.

Bad Karma said:
Generally from the tang to the wedge and then if fitting a smaller barrel to a larger channel a small 1” long pad at the forend tip.

Unless you have a specific problem with accuracy or a cracked stock I really wouldn’t bother.
Click to expand...

Any improvement on accuracy? I was also considering bedding mine but didn’t know if it would really make that much difference. Curious what people have experienced. I saw where @Idaholewis shimmed his at times. Did that to my .45 with some electrical tape to give it some more front support. Put it right where brass nose cap is on the hawkens .
W

Maybe even a thin piece of leather
W

bstorric said:
Any improvement on accuracy? I was also considering bedding mine but didn’t know if it would really make that much difference. Curious what people have experienced. I saw where @Idaholewis shimmed his at times. Did that to my .45 with some electrical tape to give it some more front support. Put it right where brass nose cap is on the hawkens .
Click to expand...

Not really. The cracked Hawken was a good shooter before I repaired the crack, and after it was much the same. It’s a 1 in 60” 50 caliber and I don’t find ball shooters particularly finicky. The Renegades shot just fine with the 15/16 barrels but the inletting was done for 1” barrels and tangs so it bothered me until I bedded them. If it changed anything for the better, I couldn’t tell. I just preferred the lighter barrel and the Renegade stock fits me better. So voila! Presto chango! Reneken!

Waters said:
Maybe even a thin piece of leather
Click to expand...

I have no experience in bedding a Thompson/Center sidelock muzzleloading rifle.

But, it must be beneficial, at least 50% of the time, because of the following story that I will pass on to everyone here.

There was a thread several years ago over on The American Longrifles forum vis-a-vis how discriminatory some traditional muzzleloading clubs could be. I can distinctly recall a member recounting how one day 2 new shooters showed up at his club to participate in the monthly shoot. I believe that the event occurred back in the late-70's to early-80's.

It turns out that both men were shooting Thompson/Center Hawken rifles, most likely in .50 caliber. Both were teased quite a bit for bringing, and shooting, modern low-quality wanna be Hawken rifles.


Both of the men turned out to be excellent shots, out shooting all of the members of the home club. After the competition was over, it was discovered that both of the men's rifles had been full-length glass bedded for accuracy.

Using the glass bedding as an excuse, the club members then unilaterally decided to disqualify both shooters from that day's competition, took back the prizes that they had won fair & square, and angrily told them to never come back to their club in the future.

Apparently, this type of behavior from home club members towards visiting shooters that cleaned the club member's clocks was not an isolated incident. That thread exposed how petty & nasty human beings can be when they get their bubbles burst by someone outside of their direct sphere of influence.

That the men with the custom longrifles were out shot that day by the visitors with the Thompson/Center Hawkens, just proves the old adage of never underestimating the man with only one rifle. Especially, if he shoots a lot, and stays in practice.
Last edited: Sep 16, 2021
W

I don't know anything about black powder cap lock rifles I am new at this that's why I joined modern muzzleloader to obtain facts from people that have been down that road and have obtained and earned that wisdom I know for a fact on a common bolt action rifle if it is glass bedded it will increase precision and accuracy if one nut or bolt is loose It will change the harmonics of the whole rifle that being said glass bedding on a muzzleloader should have the same or similar results Even firing with the ram rod in or out should make a difference in the rifles harmonics if this can be measured then it exists if something can be measured it is a fact I'm sure it makes some difference question is is how much bud if I glass bed it I will definitely put it on paper and post it for you guys
You must log in or register to reply here.
Share:
Facebook Twitter Reddit Pinterest Tumblr WhatsApp Email Link