Made it back from my elk hunt. The snow really made things interesting and pushed me to my physical limits. Definitely need to up the training regimen for next year. Staying in Austin Atkinson camp with Mitch, Chalee, and Larry was a great experience. Just all around good camaraderie. And Chalee’s cooking was spectacular. Big thanks to my buddy Nate for coming out from Iowa to give me a hand. If you’re interested in the story of the hunt, here it goes…….. After not seeing anything the first two days, we located a bachelor group of 9 bulls bedded down across the valley from us at about 1000 yards. I was lining up for a shot when a herd of around 100 cows and smaller bulls started to push through—lots of bugling and chirping. This got the bulls on their feet, but not moving. Unfortunately, a few moments later a couple of distant shots started the bachelor group slowly moving with the big herd up the valley. At that point, things got way too chaotic for a 1000 yard shot. Realizing there wasn’t going to be another chance for a shot from my current position, I quickly pulled up OnX Hunt and determined if we booked it up the ridge about a 1/2 mile I should have a great shot from above them as they crossed the saddle at the top of the valley. When we made it to the spot overlooking the saddle, some of the herd was already through, and I caught a glimpse of a nice bull just as he disappeared into the thick trees over the lip of the saddle. Fortunately, we hadn’t missed them all, and a few moments later, Nate spotted another nice bull coming up the valley. The bull came through only 200 yards below us, but didn’t present a shot until he hit a clearing at 300 yards. Sitting and using one of my tripod legs as a rest, I put what I thought was a good shot on him as he quartered away heading up the saddle. However, after the shot, neither Nate or I could find him. Needless to say, I started to have a lot of doubts. After glassing the saddle for at least 10-15 minutes and not being able to spot him through the intermittently thick pines, Nate stayed up top to observe while I made my way down the hillside for a closer look. When I reached the bottom, it didn’t take me long to find him down behind a pine tree on the side of the hill. After watching him through my scope for about a minute to make sure he was dead. I hollered up at Nate, “bull down!” Then I took 5 more steps towards the downed bull, and much to my surprise, the dead bull jumped up and started to run off! In my haste, I totally whiffed on the first shot, and I think my second shot connected with a tree that he ran behind as disappeared over a knoll. At this point, I was very discouraged and even more so after I couldn’t find a single drop of blood where he was bedded down. With nothing else to do, I put a couple of fresh rounds in my gun, and made my way over the knoll in the general direction the bull had headed. As I topped the knoll, I was elated to see the bull had only gone about 50 yards before going back down. Needless to say, I didn’t hesitate for a second that time in putting a finishing shot in the neck to seal the deal! (First shot, while not terrible placement, was maybe a little back and a little low.) Shortly after, Nate made his way down from his vantage point. After taking a break to eat some lunch and get pictures, we quartered the bull out, and left the meat hangin in a tree for the pack horses to come get. After the 2.5-3 mile hike through some of the nastiest terrain I’ve ever been through, it was a very satisfying feeling when we reached the road 2 hours later! 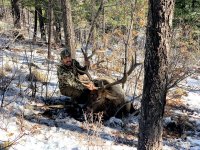 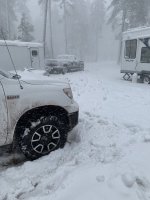 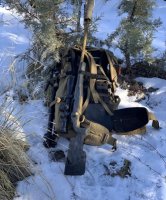 Great story, a good effort. That looks like a lot of gun, what type and chambering?

Widude said:
Great story, a good effort. That looks like a lot of gun, what type and chambering?

Beautiful scenery. What was the elevation?
L

Beautiful scenery. What was the elevation?
Click to expand...

Where we parked to hike in was about 6800ft and shot him at around 8K.
D

I need to go! Never been out West hunting.

Elk Hunting gets in your Blood, it sure did mine!! Sept Archery when they are Rutting can be an Exhilarating experience
L

Elk Hunting gets in your Blood, it sure did mine!! Sept Archery when they are Rutting can be an Exhilarating experience
Click to expand...

Yeah it does! I would love to do an early archery or ML hunt here, but not sure I'm willing to wait the 10-20 years for a tag.