Rumor Bestill is working on breech plug for White Rifles

He made mention of it in his latest video.

Yes he is. When the flash hole to the Tresco nipple wears out you will be able to just replace the nipple. More to follow.
S

I hear it will have threads for replaceable #11 nipples. Not sure about 209

Are they available to the general public yet?

I known it will be less $ than the White brand plugs, too.

michiganmuzzy said:
I known it will be less $ than the White brand plugs, too.
Click to expand...

Yes it will be.
S

Bestill
If you come here looking for what i was talking about i downloaded it then edited it off of here . PM me if your curious/interested in that design . Sorry for the confusion/panic .
---- Sideshow

This is an AWESOME Deal right here!! In my opinion, The original White Breech Plugs are the “Weak Link” with the White Rifles. Flash holes wear out PLAIN N SIMPLE!! Does anyone really believe that the Material that was Used to Produce the Original White Plugs is better, Or even as good as Today’s Ampco, And The Stainless that Lehigh is using for Nipples/Vent liners? There is NO WAY!!

I have seen a Number stated on Doc’s Plugs (Something like 5,000 and Stil going Strong?) What that means is STRIKES to the Nipple, NOT FLASH HOLE WEAR!!

We know for a FACT that Flash Holes wear out, It is inevitable! For EVERY action there is a Reaction, When you push a Bullet down a Bore there is X amount of Blowback that escapes back through the Nipples Flash Hole, The LARGER the Bullet, and Powder Charge, the FASTER the Flash Hole will Erode/Wear out. Simply Put, Flash holes can only take so much, They continually erode allowing more n more Blowback, On a Sidelock the Hammer will Start to move to Halfcock, the more the Flash Hole wears it can go to Full Cock. When the Flash Hole gets to .034-.035 it SHOULD be thrown out, and Replaced! The problem with Doc’s Plugs is the Nipple/Flash Hole is Built in the Plug, Leaving you FORCED to Replace the Entire Breech Plug over a Worn/eroded Flash Hole, at 50 Bucks a Pop that is RIDICULOUS!! Why not make a Plug like Knight Rifles, where you Simply Replace a Cheap 5-6 Dollar Nipple when it’s Flash Hole erodes?

I have Worn BRAND New Treso/Ampco nipples out in as little as 12-15 Shots, Can you imagine Replacing those with new 50 Dollar Breech Plugs after just that few Shots? ME EITHER!!

Here is NO MORE than 12-15 Shots Through my .36 Cal with 340 Grain Bullet, This was a BRAND New out the Package nipple before i Started, it was FAR BEYOND TOASTED in ONLY 12-15 Shots. This is an EXTREME situation, But FACT is it Happens. I had to go to a Platinum Lined Nipple in this .36 Cal Rifle.
BADLY Wore Nipple/Flash Hole on Right after 12-15 Shots, beside a Brand new one 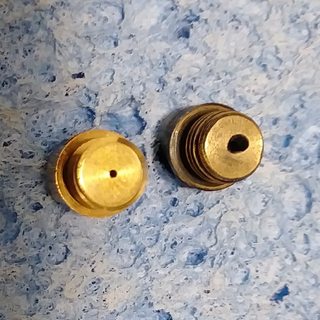 I know Doc Shows a Breech Plug with a Replaceable nipple, But look at that odd Flat Head it uses For Removing it, I believe he even Sells a Tool for a Removing it? Now think about Seized up Plugs? We all know that is Another INEVITABLE thing, If you Shoot Enough, Eventually you are Gonna Seize a Plug up! NOTHING beats getting on that Plug with a Hex Head, Socket/Ratchet Setup, Where you can Put some Leverage in it.

This is the Reason I didn’t Bother Shooting the Super 91 i had, I wanted to get this Breech Plug, Flash Hole Situation Corrected before i even Began to Develop a load for the Rifle, Why bother working up a load for it when i had ZERO control over Flash Hole Wear? And I wasn’t ABOUT to buy several 50 Dollar Doc White Breech Plugs!! I ended up Trading that Old Super 91 to 1874SharpsShooter, I had only Shot that Rifle 1 time.
Last edited: Dec 5, 2019

I had 2 White Breech Plugs that Came with the Old Super 91 i had. One was a Musket, and the other was a No. 11 Percussion Cap Version. I could visually tell that the Musket Breech Plug Flash Hole was Worn, When i bought my Set of Precise Pin Gauges i Was able to Accurately Measure it, That Musket Breech Plug had a Flash Hole of .041, Talk about BADLY Worn out! Remember, .034-.035 SHOULD be the Throw Away point. SURE MAKES BETTER SENSE TO ME TO REPLACE A 5-6 DOLLAR NIPPLE over a Worn Flash Hole, RATHER THAN A 50.00 Dollar Breech Plug

I would place a Bet that MANY of you with These Old White Rifles have Worn Flash Holes and just don’t realize it? If you shoot your Rifle much at all, they Wear out!
Last edited: Dec 5, 2019
S

Be nice if 209 plug would be offered
S

sbuff said:
Be nice if 209 plug would be offered
Click to expand...

The original bp can be drilled and tapped for a ventliner. I did one but haven't had a chance to try it out yet.
S

michiganmuzzy said:
The original bp can be drilled and tapped for a ventliner. I did one but haven't had a chance to try it out yet.
Click to expand...

michiganmuzzy said:
The original bp can be drilled and tapped for a ventliner. I did one but haven't had a chance to try it out yet.
Click to expand...

I talked about having this same thing done back when i owned that Super 91 Rifle, in fact i spoke With Ron L on here about doing it for me. But ended up Trading the Rifle to 1874Sharpsshooter Before Doing anything with it.