Herb Knife and other Musings 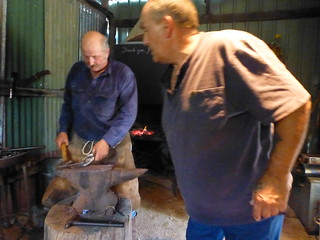 <a href="https://flic.kr/p/2aherkb" target="_blank" rel="nofollow">P1030101 by Gordon Hazel, on Flickr" />
Gents, my mate Gary who is both a farrier and blacksmith of many years ( second generation blacksmith) dropped over and we spent a few hours over a couple of days in my smithy. I made my second herb knife out of a small file, with Gary giving me a few of the finer points of smithing. I am largely self taught so getting a tune up saves me reinventing the wheel as they say.  Handle is a bit of apricot branch and the cross pin is a piece of no 8 soft fencing wire. Blade was hardened in canola oil.
Just yesterday dropped into a place owed by a chap who haunts farm clearing sales and buys and sells old mac
hinery and tools. I picked up the remains of a Buffalo post drill mod 611, it had still had the auto metic feed which I have now fitted to my own Buffalo mo 615. It works a treat and they are like rocking horse poop to find, have been looking for years. I did have to pay for it though, but there you are. <img src=" 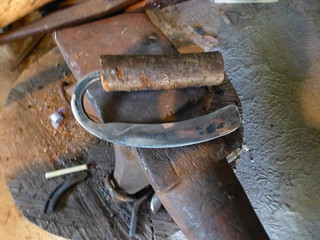 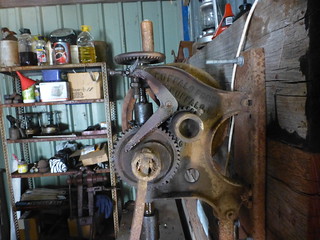 Very nice. Some of those old machines work better than anything made today.  I wonder if an old horse shoe would make a good herb knfe.

I don't see why an old horse shoe would not make a herb knife, jus have to be a bit careful of the edge as shoe steel is relatively soft.
B

Hey this is fashioned after a colonial period vegetable chopper and like this one they were made by the village/settlement's blacksmiths from horseshoes.

What is also interesting is in early times only the wealthy could afford shoeing, just how many veg. choppers were ever made early on?

I first found one in Maryland back in the 50's didn't know what it was until visiting Williamsburg in the mid 70's where they had several originals found there on display.  ​
Interesting item from everyone's past according to Williamsburg site.​

Did a barrel lap in the smithy today on the Baker Fusil. I sure has made it nice for a patched ball to slide down now. Still plenty of pitting but judging how it went with the thick greased felt over powder wads and loaded easily then. Just noted a certain amount of roughness when seating the ball on the wad. Will get to shoot it on Sunday and see if it has improved. 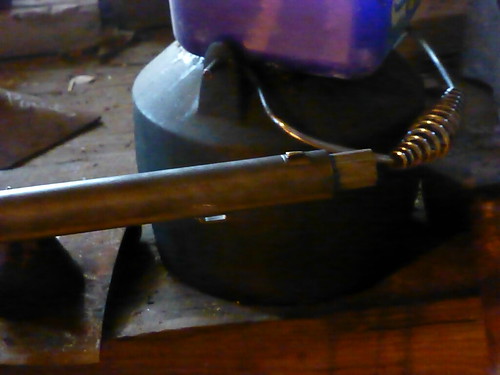 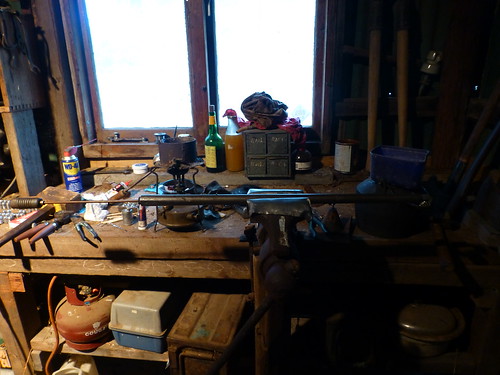 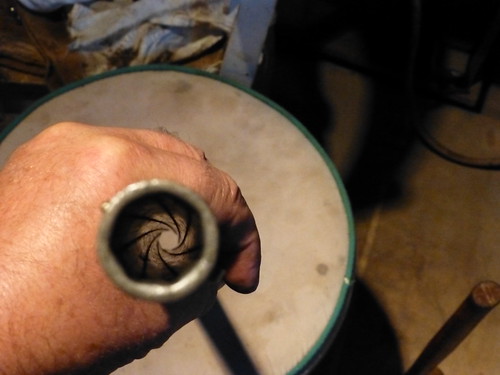 That show breaks a lot of good looking knives that would never be treated like they do.  :Questuon:
B

Gordon how have you and Mike been, haven't seen or heard from you guys since Jonathan pulled the plug on postal matches.

You two livened up this websight, kick your buddy in the tailfeathers for me.  :lol!:

I have not seen much of Mike, will catch up later this week. He has gone back to being an ESO in a gold mine about 3 hrs east of my place. He is a lot happier in that role.  I have not had much of a chance to do anything in the smithy except cast bullets, seem to be constantly busy with jobs around the place when I get home from the mine. I have two weeks off each time, but cutting fire wood and other chores, don't even get much time on horseback either.  A fencing contractor is supposed to be coming today to replace a length of post and rail fence I pulled down on Monday, but is suspiciously quiet, inspite of being booked in a few weeks ago. Have a nasty feeling I will have to do the fence job myself now. Had a great weekend with he black powder club on a farm west of York the other day, lots of powder burnt, shot the hell out of a car wreck with my cannon, shot my .72 bore rifle etc and drank lots of rum !!
B

Gordon did your fence guy show-up? What's Mike's job as a ESO in a gold mine.

Buck, , Mike is an Emergency Services Coordinator, also site rescue and first aid. It is quite a full on job and he is really enjoying it. I can no longer access this site at work as the company thought police have banned it, firearms ! I am not supposed to be goofing off. I could not access this new site on my old password or log in so have re registered as Heeler.

Hey folks,
Anyone that can't login under their old username and password, just email Angie and she will take care of you pronto. You don't have to re-register.