I'm a fairly new member to this forum, so I thought I would show a mule ear lock that I've been working on lately. I have incorporated several ideas from commercial locks that I like and tried to build something that I like more than previous locks.

The locks that I took ideas from were Bob Tingle, the Pioneer Arms lock, the L&R mule ear, and a machinist who used to post quite a bit named John Taylor. I'll show the inside views of the locks so you'll know what I am referring to. 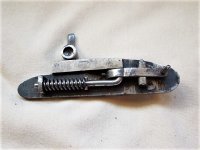 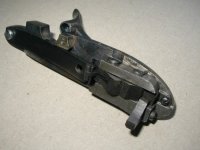 So those are the locks I'm using as design guidelines to make my lock. My mule ear lock will have a coil mainspring and be most similar to the Pioneer Arms and the John Taylor locks.

So here are some photos of the beginning of this build. The first is the material I used to make the lock, a piece of steel found along the roadside while doing construction: 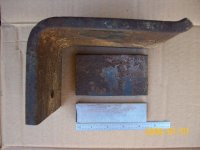 This was a piece of 1/2" steel shaped into an "S". The lock plate blank is at the bottom. Pay no attention to the date, darn camera default setting.

Next is the lock plate interior roughed out and trimmed somewhat: 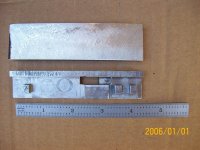 Next is the beginning of the hammer, sear and an aluminum disk (5/8" diameter) used to fit the hammer slot in the lock plate. 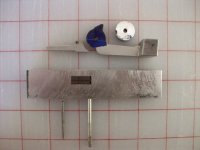 One of the things that I didn't like on a lot of mule ear locks was the ungainly hammer. The hammer on a regular percussion sidelock can make or break the look of the lock and the weapon. Anyway, it's just a peeve of mine, so on my lock I'm going to use a Jenks carbine style lock. The Jenks is a back action lock and has a plain but decent looking hammer - here's the Jenks:

Here's a photo of the hammer as of today, there's still some minor shaping to come: 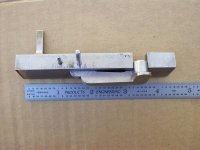 Here's the interior of my lock:

You can see that the lock has two sears. The main sear engages the 1/2 cock and full cock on the hammer. The secondary sear pushes against the main sear tail, so you can use a conventional style trigger. There is a small coil spring under the main sear. I'll take the lock apart and layout all the parts in another photo. 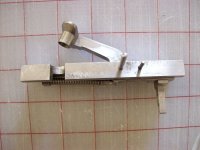 and another at full cock: 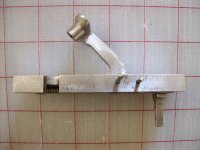 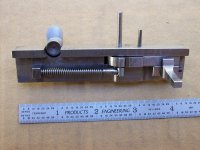 The mule ear lock is at about 90%. Here's the latest photos:

The major mistake is that the inside portion of the hammer is too high on the lockplate. The hammer should be about 1/4" lower because the sear contacts the side of the barrel. I need to bevel the upper edge of the sear along the bolster some more for clearance - live & learn.

I was thinking of using this lock on a target pistol with the lock mounted on the left side facing to the rear. That way I can have the barrel overhang the grip to the rear like an inline pistol by Yazell or 10-Ring use to make or like this mule ear by the late David Brooks: 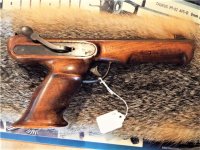 So after looking at the lockplate long enough,I decided that the lockplate is too long. The sear is way too long and the 2 blocks that pivot the second sear need to be moved closer to the hammer. So I cut the 2 blocks off and made a tab that had the new blocks. I cut a slot in the plate and nailed the tab through and it looks like this now: 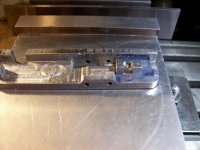 The camera wasn't working so I don't have photos of how I install the tab through the plate, but this photo is similar from when I made a wheel lock: 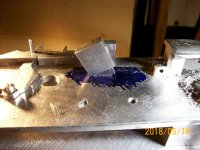 So after you get the tab through the plate, you peen the metal over like this: 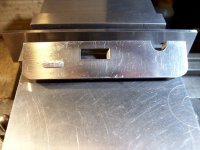 Then you mill off the excess tab, draw file and wet & dry sandpaper it comes out like this: 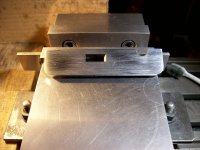 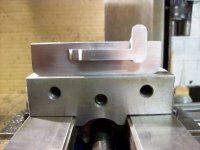 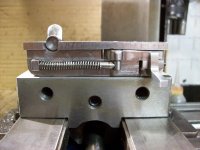 If you look at Reply #9 you can see the difference. Mike
C 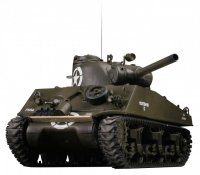 Nice work, I built one this past summer similar to a Dale Story lock with modifications.
G

Grandpa said:
Nice work, I built one this past summer similar to a Dale Story lock with modifications.
Click to expand...

Got a camera? Post photos of your build here - I've got no problem with you showing your mule ear lock, it's lonely out here.

Here's a couple of photos of the Dale Storey lock: 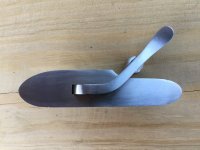 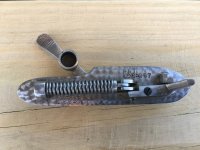