I have spent most of this evening reading up on the various rituals between shots for accuracy and/or easier loading.

My CVA Wolf is pretty hard to clean between shots. I can’t run a dry patch nor a spit patch straight to the bottom without some effort, then a WHOLE LOT of effort to get it back out. I usually run it down until I feel some resistance then run ever lengthening strokes. Very careful not to run it too deep so it won’t stick, until I finally bottom out. It will stick easily on the fouling from JUST ONE SHOT of 777.

I have some Thundercloud presaturated patches that make it a whole lot easier. The container says “presaturated” but they are just barely damp with anything, I do not think you could wring a drop out of them if you tried. The gun also loads a lot more easily after a Thundercloud patch followed by a dry one. But I worry about the effect on my accuracy, seems very poor after I run these.

I keep denatured alcohol on hand at home for airgun projects. Next range trip I plan to run a Thundercloud patch followed by an alcohol patch, then a dry one.

I also plan to try firing three shot groups from a clean bore with no prep to simulate shooting a cold clean bore with two quick follow ups. As well as thoroughly cleaning, between each shot.

I have read that 777 cleanup is the easiest except for Blackhorn 209. I have also read that some GOEX black powder is actually easier to swab between shots that 777. What about Pyrodex?

Besides Blackhorn 209, what is the easiest powder to swab between shots?

Just a suggestion, "Wet" Windex patch to soften the T7. I had that problem with my Optima and I used 50/50 Ballistol and 91% alcohol -wet, then dry patches .
Also, a .45 cal Jag if bore is too tight with a couple cleaning patches might help to get crud ring softened.

For real black powder, Swiss is probably the cleanest burning imo.
When I'm at the range, I swab with one patch that I dampened with windex. I use the cheap dollar store brand without ammonia.
Then twice with a dry patch.

Something else to try, polish the bore with some JB bore paste.
Or, something that I've done is to screw a 45 caliber cleaning jag on my ramrod with cut strips of scotch brite pads, (green ones).
Do about 50 strokes, changing the cut strip every 10 strokes.
This process will smooth out any roughness and make the gun much easier to load.

Pyrodex Select is what I used to shoot. I got away from T7 for the very thing you are describing. I’m now shooting Swiss or BH209. I also use a windex patch to clean with. Down once with it pretty moist, not dripping, but wet, flip the patch over and down again. I do scrub a bit as I get near the breech. I’ve gotten too many ramrod stuck over the years by going right to the bottom. I then do the same thing with a dry patch. Down once, flip it and down again. Pop a cap then load up again. My Accura is a beast to load also.

i use Black MZ powder and sometimes fire ten rounds or more without swabbing. There is no deterioration of accuracy.
B

That’s good to know about the Accura. I was thinking about getting one, assuming the higher grade of barrel would be smoother and foul less.

If you want to keep running pellets I found the imr white hots to have a little less crud ring and overall fouling, but it is kind of a gritty fouling.

When I can find some in stock I am going to try some 777 209 primers. Supposedly they are not as hot as a regular 209 and develop less crud ring as well.

A powder you may want to try is Pryodex P. Can’t tell you how many shots I used to shoot without having to swab my bore. Just clean you bbl when you get home.
D

Dont tell me, you are using sabots right?
B

How about these? 348 grain power belts. I can’t imagine they fly fast enough to cause bullet failure.

The Powerbelt Muzzleloading Bullets 50 Caliber 295 Grain Hollow Point Pack of 20 will get the job done with authority. And in states where copper-plated...

For powder i shoot a lot of Goex. Kind of dirty but the fouling is soft.

Plus 1 for the Windex spray routine mentioned above I also use alcohol and water I swab until fouling is cleared from the barrel between shots. Honestly I don't even bother running a dry patch. Never really had an issue doing it that way I assume the alcohol evaporates fairly quickly.
M

Pyrodex RS loose or Pellets, Load & fire 3 shots without patching, get one-arm loadability & 1 moa. If I patch between shots, I spit-patch down & out, turn over, repeat once, then dry patch once down & out. Dry patch 2 times d&o and loading effort increases dramatically.

Pryodex P. One of the cheapest powder to buy. You’ll be able to shoot many times without having to swab your bore.
B 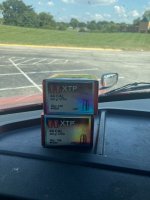 Stopped by bass pro and snagged two of these

I also picked up some Pyrodex P. I hoped to find select but all they had was 777, P, and RS.

I have never had a problem with 777 all I ever used was windex Never run that patch right to the bottom it will stick every time run it half way and go back and forth a couple times then down to the bottom You may want to try bare bullets with a wad I shoot the fury sized to .503 VG accuracy You can oder a sizing pack when you find the exact size of your bore order them that way

I was just thinking that I recently bought some Pyrodex Select, just to try it.
It shot pretty good in one of my sidelocks.
Very clean burning, a bit better than triple 7, imo.
A

edmehlig said:
A powder you may want to try is Pryodex P. Can’t tell you how many shots I used to shoot without having to swab my bore. Just clean you bbl when you get home.
Click to expand...