I just got a Savage 10ml2 and have plenty of load data, i just want to get some feedback about what load combo may work best. I want to see if theres a pattern from the feedback,if yall would. I appreciate it.

Blackpowder8bore said:
I just got a Savage 10ml2 and have plenty of load data, i just want to get some feedback about what load combo may work best. I want to see if theres a pattern from the feedback,if yall would. I appreciate it.
Click to expand...

Here is a target I shot using 5744 and a TC Shockwave bullet in an ez glide sabot. These aren’t supposed to shoot well out of the Savage, but the right powder combo worked. They have shot better than any other bullet I have tried. I have only shot 5744 and N110 (I think N110, maybe 120 I’m not where I can look), I tried XTP’s in short and long black MMP sabots, and they didn’t shoot well at all 2.5” was about the best I could get.
This target is 3 shot groups of 45,44,43,42,41 grains. All at 100 yards. Kinda hard to make out what’s what, the best groups were at 42 and 41 grains, with 42 being the winner. Each shot group is circled in a different color. The rifle was swabbed in between groups, but not shots. Breech plug was not touched during this outing. There are some different shots on the target from a different gun so it’s kinda cluttered. 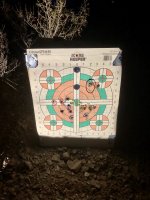 SR4759 for 250 to 300gr bullets. Somewhere around 42-43gr. Great powder for all weights but no longer offered.
N110 for 225gr to 250gr bullets. It can be quite rough on sabots especially with 300gr bullet and "old book load data". Stay between 39gr and 41gr. Great speed and super clean too. Works ok with even less powder if needed.

If all you want is BH209 type speed you can use 5744. Its a dog and dirty but otherwise very dependable. Probably a really good choice if you want to shoot 250gr-300gr XTPs at less speed. I never cared for it personally.

I shot this group with my Savage from 100 yards, The first three shots are the cloverleaf. I adjusted my scope and shot the bullseye. I was using 42 grains of 5744, a Hornady 300 gr XTP (.452) and standard Win 209 primers. Lately I've been only shooting BH209 out of this gun because smokeless isn't legal in my state. This winter I plan on hunting other states so I'll start playing around with smokeless again.

If all you want is BH209 type speed you can use 5744. Its a dog and dirty but otherwise very dependable. Probably a really good choice if you want to shoot 250gr-300gr XTPs at less speed. I never cared for it personally.
Click to expand...

Those other combos you listed, are they Savage recommended loads? As I recall, there were only a couple of different powders listed with a small handful of bullet combos that were approved by Savage in their rifles. I’m sure they’re safe. Just those pictures of the blown up rifles had me paranoid for a while... until I understood what they were.
Bad propaganda mainly.

60gr of N120 makes less peak than a N110 book load. So does Reloder7. N120 was never an official powder but its been used by many and its well tested.

The best cheap load going is probably 63gr Reloder7 and a 300gr XTP or 325gr FTX. That is around 2250fps and very easy on sabots. Easy powder to find too.

Reloader 7 shot real good for me when I had an ml2. Sabot friendly powder.

Nothing about Reloder7 screams "im a great powder" but it just works. Cheaper than 5744 last time i checked and better speed. Slightly cleaner too. As long as you stick to a 300gr ish bullet its very dependable because its double based like 5744. Just has less nitro added. Using a 250gr you will likely see larger extreme spreads in fps. N110 is a far better powder for a 250gr and rock solid dependable unless you use too much. In my NULA all i shoot anymore of N110 is 39-41gr of it. Still has really good speed and lighter recoil.

Thanks for the input.its appreciated. Seems like 4759,RE7,and 5744 and VV make up the staples.

Yes but SR4759 is no longer made. If you find some its precious because its a good all around powder. There are a couple others listed on the "current" Savage MLII load data page. I would avoid IMR4227 at least until you have gotten familiar with SML loads. Its can be problematic in the wrong combination such as loose sabot and 250gr or lighter bullet.

Most of all....KEEP YOUR FLASH CHANNEL CLEAN WITH A 5/32 DRILL BIT and check your vent liner after 20-30 shots. When the flash hole in the vent liner reaches .036 its shot. Better yet get a MLII aftermarket breach plug with a tungsten bushing in it. I think ASG still has some. Very minor fitting to the primer pocket might be needed on any new MLII breach plug.