Since a federal judge mandated an immediate opening to a wolf season in Wisconsin those who've drawn tags are doing amazingly well. Several of the zones have met quota within two days of Monday's opener. Still, roughly 50% of the available tags went to the tribes in ceded land so the season, while appearing to be a dandy is still just a token season. Wisconsin, like Minnesota, has an over-load of wolves....way more than what the dnr counts claim. Ma and I drove to Duluth yesterday and saw one cross I35 about 15 miles north of Hinkley in broad daylight. I'm sure Michigan's UP has more than they need as well.

Just once I'd like to see these three states get wolf seasons without some vague judge in Georgia or South Carolina stop the hunts. Maybe these three states should start live trapping operations and drop them off in the home towns of the judges making these stupid decisions based on bleeding heart's wants and not on real data. Minnesota has way too many wolves. We drove to our cabin property and took a look around. Not a deer track in the yard there, but we had plenty of wolf tracks. I wish the Wisconsin gunners and trappers a great season. 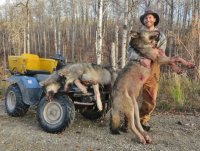 There's not a lot of things that endure envy in me but that there is one of them! Great work mate.

Not mine. A pic found on another site. Story is he was stalking a deer until he realized that he was being stalked, then he killed the wolves in self defense.

Its a shame the pic is not current. There'd be snow on the ground where the Wisconsin hunting would be taking place. Those are some dandy wolves though.

I hope they keep the wolf season going, next year. The anti’s are always looking for a legal angle or judge to stop the hunt. The numbers are well above the original target number.
I

I also hope they keep the wolf season! the states should be allowed to manage the wolves just like everything else! I know guys that lost 10 beagles at one time running snowshoe hare in the up of Michigan. we used to go to the up to run our dogs on the hare but the wolves have gotten so bad not too many going now.

I beagle said:
I also hope they keep the wolf season! the states should be allowed to manage the wolves just like everything else! I know guys that lost 10 beagles at one time running snowshoe hare in the up of Michigan. we used to go to the up to run our dogs on the hare but the wolves have gotten so bad not too many going now.
Click to expand...

Id be just sick if I lost my dogs to wolves like that. It's happening with Grouse hunters in NE MN and NW WI as well. I know of a couple guys that have lost their german shorthairs to wolves. Each time the hunters heard it happening but by the time they could get through the brush it was too late. We need a wolf season bad in MN. Our deer lease we had west of Duluth over the past 7-8 years we get more pics of wolves than deer on the trail cams. Wasn't even worth renewing the lease after having it for 15 years.

Well done to the WI hunters who put a hurt on those wolves in just a couple days!!!!

Now they want to reintroduce grizzly to NM and Colorado. They've already ruined the deer season in southern NM by reintroducing the Mexican gray wolf. At least it is smaller than those monsters you have up north, so the elk are doing well. I'd like them to reintroduce wolves to Central Park in NY, and near Washington D.C. Years ago I was on an airplane wearing my Forest Service uniform. The woman seated next to me said how excited she was that the wolves were being reintroduced. I told her there was a good reason the wolves were killed in the first place. She was thankfully silent the rest of the trip.

I keep hearing that wolves don't kill people, so I googled it. Not many stories in the 20th century, but one I ran across from the 19th. Two hunters never returned, so a group went out to look for them. They found clothes, bones, and guns, and 17 dead wolves. Wait until the wolf population gets really big.
You must log in or register to reply here.
Share:
Facebook Twitter Reddit Pinterest Tumblr WhatsApp Email Link