Great pictures thanks for sharing
A

Not really, I'm just too cheap!

I was dove hunting the other day and driving to a different tank. Cows were in the road and not wanting to climb the steep bank on either side. I was honking my horn and finally got them to move. I looked up and saw this guy looking at me from less than 100 yards. I've drawn 3 tags, over the last 15 years or so, and they are the best eating game. When I shot my first one, my wife told me to quit hunting anything else.

What's that animal and where are they?

Never used a trail camera, I guess it’s time to get one.

deermanok said:
What's that animal and where are they?
Click to expand...

Oryx - New Mexico (and TX). And Africa, but I’m guessing this photo was taken in NM. Beautiful animals!

This pussy cat was pictured on a busy deer trail, I was surprised it was in the middle of the day 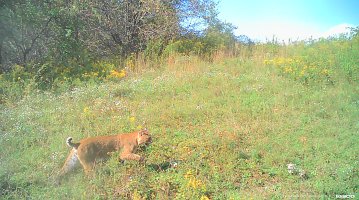 Had fun with this photo! Friend photo shopped it for me.I sent it to everyone in my address book, Brandon Don’t Move!!! Got some funny replies

They imported oryx (gemsbok) into NM back in the 70's to White Sands Missle Range. They have done much better than expected, and have expanded their range. As an old guy in Tularosa, NM told me during the drought "the cattle are dying of thirst, the deer are starving, and the oryx are geting fat and having babies". The idiots in the Park Service tried to "herd" them off the Park with horses. One of the Forest Service volunteers got his horse gored. They are the only antelope to have been documented to have killed lions. Every once in a while they'll see one with a coyote stuck on his horns. Next, the Park payed professional hunters to kill them, because they didn't want us deplorables on the Park.

They also imported aoudad (Barbary Sheep) to NM and they have done well also. They have documented that they can go two weeks in the middle of summer without water. I believe oryx are the same.
R

deermanok said:
Got this trophy on my trail cam a couple years ago. View attachment 20468
Click to expand...

Best End of Season I Have Ever Had

When the stars align....