This is a Win mod 12 that my cousin inherited from his dad. He is a 3rd Generation Machinist with his own shop and has made Breech plugs for me. This is payback, good ole barter system. This shotgun was definitely well used and somewhat abused. Good thing is that the bore must have been cleaned and oiled well as it was bright and shiny. The Restoration was mostly the wood as it had really no finish left. The Pad was replaced at one time and not ground too bad but who ever did it did not round it off as well as it could be. The forend had a split that ran about 6" up the length and would not have taken much effort to pull the narrow part off. You can sort of see it in one pic, right side about 1 inch or so down. It looked like it stood on its pad in water but he said no, but was hunted a lot in rainy/snowy weather and probably not dried off good. Not sure what caused the stain but it looked like water to me. It was not oil as I tried removing it with acetone and that will usually suck the oil out of the wood. The acetone did not touch that staining but sanding removed it. It deteriorated the screw holes for the pad so that had to be repaired too.

Hopefully it will meet his expectations. 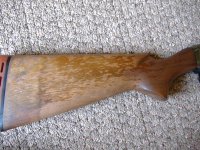 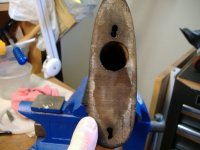 And The After Pics 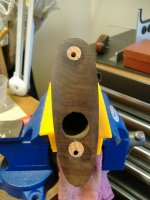 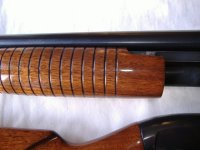 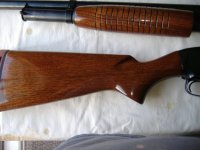 Ground the pad to fit better. 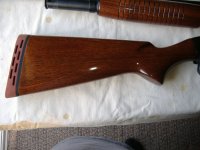 Thanks mossy. I think this one is the worst one I ever did. It fought me all the way.

Dang Shawn that is a real change! AWESOME... you would not believe the value of those antique Model 12's.
F

Looks nice! I bought my son a really nice model 12 featherweight a number of years ago. I know he'll take good care of it.

I don't think I looked at what they are selling for. I know this one will never be sold though. Its at least good that the metal was all still in good shape. When he asked me to do it I was shocked though at the condition of the finish when he handed it to me. His Dad used it quite a bit and my cousin used it as a Kid too. This one was his dads and I am pretty sure he bought it new. The Last one I did was a double barrel that was his Grandpa's. I sort of doubt these will ever see the field again, just pulled out and admired and think of the memories.

Great work!
I have a Black Diamond Trap in the safe.

Thanks for the kind word guys. This one about drove me nuts and lasted actually more than just the winter. The Stock was a real pain from the loss of finish and that let the weather get to it I guess. That caused the grain to raise up and separate on it. A real pain trying to get it smooth and filled.

Great save Shawn! My dad had several Model 12 Winchester shotguns in .12 an .16 guage, that I used while growing up hunting squirrels an rabbits. They are a sweet shotgun to say the least. They are now in the hands of his grandsons. Thanks for bringing up great memories!!
D

Nice work. I revived an old 37 Win. about 35yrs ago, it belonged to my grandpap, passed it on to a nephew. Save the ones you can.

Thanks guys. Leaving tomorrow morning for Ohio. Hope to get it delivered to my cuz later next week.

I made a run to Ohio a couple weeks ago and got the chance to deliver the shotgun to my cousin. He is a Machinist with his own shop and does very high end work, a lot for it is for Military. He does a lot of reverse engineering on obsolete components on ship gear boxes and the like. So when he liked it I felt pretty good. He sent me this pic while I was driving back to NY. The shotgun at the top was his Double I did a couple years ago, posted it here, and the Model 12 below it.

I have this old model 12. This one has one of those hideous adjustable chokes. This model is kind of rare. They made one that looked like this that they called a skeet version. But this one pre dates the skeet model. I would like to replace the butt pad on it. Its not factory so It doesn't matter. I would also like to have the corn cob cut off the end and a set of Briley thin wall choak tubes installed. While it would not be a factory perfect gun it would be more appealing to the eye.