How Many Muzzleloaders Are Also Archers?

oldfrank said:
I have been a Traditional Bowhunter always except for one season in 1976. I bought a Browning Cobra compound, killed one deer with it and sold it.
I just like traditional, mostly longbows but I do have one recurve and even a warf bow.
Click to expand...

My bows are all old school compounds like Bear Whitetail 2s, recurves, and a long bow I just bought. I have 2x Crossbows (Excalibur G340 & Barnett Jackal) My muzzleloaders are all traditional style T/Cs and musket repros like 1853 Enfield 3 band, and 2x 1863 Zouaves. My only inline is a T/C scout pistol in .54 cal. I'm just getting back into BP pistols after buying 2x Jukar Philadelphia Derringers, and a Uberti Colt Walker.
6 years ago I lost ALL my firearms, ammo, reloading supplies, bows, and other stuff when our house burned...the only BP survivors were the T/C Scout Pistol and a Zouave I had at my hunting camp. My swords, battleaxes, maces, lances, spears, war hammers, tomahawks, knives and that stuff weren't damaged because I had them hung up in another building. But I lost my bayonet collection with the house.
T

Love to bow hunt! I put in for excellent muzzleloader tags and when I draw I am all too happy to grab the ole' smoke pole!

I have 3 muzzleloaders. Season in ML season in Arkansas is short but I can use my Muzzleloader during MG hunts and do.
The last 2 seasons I took deer with each legal weapon....ML, MG, and archery. That earned me 2 Triple Trophy Awards in Arkansas.
I have two crossbows which I hunt with more than any for long season.
Just recently enjoyed completing a 100 yard crossbow shoot which was as good as a rifle shoot. My 1st ever.

Photo sequence is from bottom right to left. There was 3 consecutive shots within 3/8" grouping with the same arrow.

Yeah, I sling arrows as well as bullets.

Brought the bow up from the basement last week and made sure it was still all good from replacing the Whisker Biscuit.

First shot was at 20 yards at the bottom dot and then I walked it out to what I stepped off as 30 yards. It may have been 32 or 33 yards it looks like. That is the farthest I can shoot here at the house. I normally shoot at 60 yards at the range. 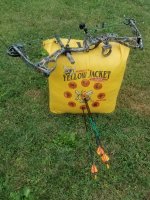 I enjoy archery every bit as much as I do sidelocks.
I've been flinging arrows since I was 8 or 9. Used to shoot recurves instinctively with fingers. Moved to compounds when I was around 12 or so. I live in the hometown of Alpine Archery and have shot their bows since I was 19 or so. A few years ago I bought a Bowtech, I like it quite a bit. My brother-in-law and I do as many 3d shoots as we can make it to every year, we shoot year round just because we enjoy it so much.
Here in Idaho we get one tag a year and have to "choose our weapon", so I archery hunt elk and muzzleload for deer. There really isn't any muzzleloader only deer hunts in the units near me, so I simply use the muzzleloader during the "any weapons" season. There is a late muzzleloader only season that my OTC elk tag is also good for, so if unsuccessful during archery I will muzzleload for elk too.
You must log in or register to reply here.
Share:
Facebook Twitter Reddit Pinterest Tumblr WhatsApp Email Link