A Twofer and a Rutter

I saw a ton of deer over our two week season this year. On the third day of our season, which is now over, I took a buck out of one of my tree stands, as he quartered away from me. I climbed out of the tree, dragged the buck to my UTV pickup point and called for evac. While walking out of the woods into a field to meet with the UTV driver (my father) at our creek bridge, I saw a huge, old doe, who ended up being so old, she almost had no teeth left, at what ended up being a distance of 68 yards. Well, I had not reloaded, so I quickly got in behind a tree, reloaded, then harvested her broadside.

On Friday, the last day of our season, I took another buck. He was also shot broadside. I had seen him earlier in the week, but had only given me a head shot, so I let him walk.

In all three instances, I had one shot kills, with complete pass throughs, and no tracking, from 40 to 68 yards. I was shooting a 220 grain Bloodline bullet in a Harvester crush rib sabot for .458 bullets in front of 110 grains (by volume) of BH209 out of a CVA Accura V2. 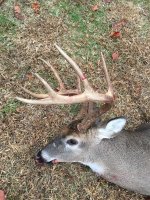 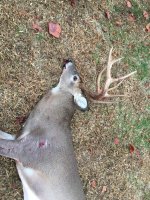 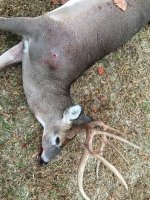 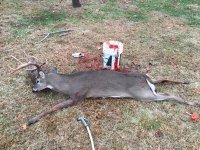 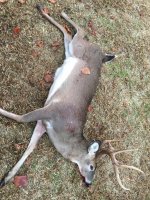 Thank you all. These deer lived in the gorgeous woods, green fields and rolling hills of beautiful Southside Virginia.

Congrats to you for a very successful season.

herschel conyers said:
Congrats to you for a very successful season.

Thank you sir...as He always has, God has been undeservedly generous to me. Venison is 85% of my yearly meat consumption, so I am happy, happy, happy!
D

Congrads on a Full Freezer and a great buck!

One heck of a season for sure. Congrats.

Great buck and great shooting! Which Harvester sabot did you use?

CONGRATS!! That Big Buck is a DANDY

Thanks to all. I appreciate it.

I was using the Harvester crushed rib for .458 bullets, which can be found here sir:
https://harvestermuzzleloading.com/index.php/products/crush-rib-sabots/item/284-50-cal-crushed-rib-sabot-for-458-bullet-pack-qty-50

The 220 grain Bloodline is a .458" bullet, which was a surprise to me when I first discovered it, but I am sure Lehigh had their reasons...which are probably over my head.

Wow, congrats! That big one is a stud! Don't see many around my place in VA that even come close to that. Nice work!