We made the 14 hour drive to TN to celebrate thanksgiving with the in-laws and do a little bit of deer hunting. For the hunting group it was my father in law, my 13 year old daughter, my 10 year old son and myself. We wanted to get each of the kids a chance at a deer and for myself I had one goal, to put some meat in the freezer with my Ruger Super Redhawk .44 mag. I have enjoyed a steady diet of tag soup since my kids have hit shooting ages since they have been filling the tags when we had shots at deer.
Wednesday late afternoon I got my chance. I was sitting in a elevated ground blind in thick woods. 2 does approached from behind me. I couldn’t turn enough to get a shot. They worked their way down the hill working right to left. I brought the Ruger up waiting for a opening between the trees. The second I would think I could get a shot they would move more and branches would be in the way. I must have aimed back and forth between the 2 of them wishing for an opening for 5 mins. Finally the front doe stopped at 40 yards and I had about a 7-8” window right to the vitals. I steadied the red dot and let the Ruger bark. She kicked at the shot and rolled downhill and 15 yards and done! I’ve killed many deer including a couple good bucks but killing that doe with the pistol was right up there for excitement.

Saturday morning we went to another property. My daughter was sitting in a ladder stand with my father in law and my son was with me. We were about a half mile apart. We were out there about an hour before shooting time. We saw a couple deer come through the meadow before legal shooting time. One was a good buck. About 15 mins into shooting time we heard something coming. I told my son to get the rifle up and get ready. A buck stepped into the meadow and as he was slowly making his way across my son was taking aim. He waited until he was ready and the buck wasn’t moving. He fired and the bucks front dropped and he ran maybe 20 yards and was done! That boy was pumped with it being his first buck. We decided to stay in the stand and not go get the deer right away. Texted my daughter to let her know we got one! That was at 6:31. At 6:43 we hear a shot and I knew right away it was my ‘06 my daughter was using. Sure enough my phone buzzes and it’s a text from my daughter “I got one too!! Let’s goooo”. Both kids made great shots 12 mins from each other! Couldn’t ask for a better trip! Coming home now with some coolers full of meat! A lot to be thankful for!

That is a trip you will all remember forever!! What a great story. Congratulations to all of you!

Hunting with a pistol is absolutely the most satisfying way to hunt there is. being a front stuffer makes it all the more rewarding.

Congratulations on the successful trip. I had a pistol kill 2 weeks ago myself. Always fun with a handgun. 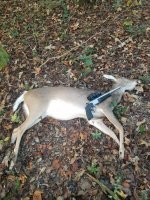 Congrats. Don't get no better.

That was a grand outing for sure.
Congrats to all!!

Family it what it's about. Congratulation all around!

Slingingslugs said:
Congratulations on the successful trip. I had a pistol kill 2 weeks ago myself. Always fun with a handgun.View attachment 17746
Click to expand...

What caliber is that cva handgun?

Just wanted to show off my pistol 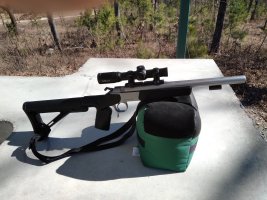 No sir, it's a muzzleloader. Just pimped out, Lol

MeatMachine said:
What caliber is that cva handgun?
Click to expand...

I figured it was a cartridge gun because I didn’t see any ramrod thimbles. A few years ago I almost bought one in 243 but my local gun shop the price was too high plus I didn’t really want the muzzle flash and noise from a 243 that close to my face.

When life gives you lemons…
2