if the deer is calm and i'm extremely confident about taking the shot is there anything wrong with taking a neck shot dead center of the neck right behind/under the head to assure a instant kill and zero to minimal tracking ? i'm thinking 50ish yards and under for neck shots and heart/lung for longer shots

Nothing wrong with it if you’re confident in your shooting. I don’t hunt whitetails but, personally, I don’t neck shoot deer unless I’ve got no other shot. Two of the biggest muleys I’ve killed were at 5 and 15 yards bedded. I shot both in the neck. I like lots of room for error with most shots. This one was killed at 15 yards. 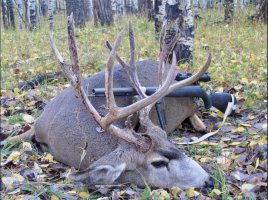 JeffB1961 said:
if the deer is calm and i'm extremely confident about taking the shot is there anything wrong with taking a neck shot dead center of the neck right behind/under the head to assure a instant kill and zero to minimal tracking ? i'm thinking 50ish yards and under for neck shots and heart/lung for longer shots
Click to expand...

If they are running I'll take a body shot, but almost all my shots on walking or standing, are neck or headshots. They drop instantly.
S

I only take a neck shot a point blank range, or no more than 15 yards. Beyond that, I shoot for a double lung shot behind the shoulder.

I prefer a broadside shot but I have taken some quartering to and away shots.
Head or neck shots are too iffy, imo. A shot like that can go south pretty quickly if your aim is off.

Why ruin a nice roast with a neck shot? To iffy for me. I prefer the boiler room shot.

I’m firmly in the heart/lung camp.

IMHO, there’s a lot more room for error, when aiming for the heart/lung area. That’s why the heart/lung shot is taught to young hunters in the IHEA’s Hunter Ed curriculum.

I tagged a doe once who had been shot twice in the jaw. Obviously, a big part of her jaw was shot off. Made me sick to my stomach to see that deer suffering, like that.

One shot through the heart/lung area… and her suffering was over.

On a more positive note- she was delicious!

JIMYJAC said:
Why ruin a nice roast with a neck shot? To iffy for me. I prefer the boiler room shot.
Click to expand...

I don’t see neck shots as a waste of a roast. I only use the neck for BBQ or burger/sausage, and they drop instantly. When you hunt in an area that you can’t afford to have a deer run out of sight bc you may never find it without FLIR or a dog & help from some friends ( I have none of that ) neck or headshots are the only way to go. High shoulder shots drop them instantly too, but you’re damaging good meat doing that. No need to do that.

Within a hundred yards and with no extreme sense of urgency, I aim for the base of the neck. Always results in DRT.

I’ve shot several in the neck mostly because it was the only or best shot available or if I didn’t want to chase them into a hell hole.

Thats just the way I was taught.

I have an exception though. Years ago we were in deer camp and had a conversation about shooting a deer in the hips to break the pelvis and put it down. Then a finishing shot. Never thought I would do such a thing. It happened the very next day. I nice buck standing with all the vitals behind a tree. I could see the rack on one side and the rear on the other. I aimed for the hips and it went down. Made it about 30 feet before blood loss finished it. Another time elk hunting. 40 acres of bare ground with 2 trees on it. Dont you know the elk stopped behind the trees. From behind the tree I saw him stick his head out and look my way. Busted. At 375 yards I put a .338 bullet through both hams hitting no bones. As he was trying to shake of the pain he stepped out and the next one went through the boiler room. Not my favorite thing to do. But when I take 10 days off of work, drive 3000 combined miles, pay 6-800 for a license, live out of a back pack, and am hunting with no guide on Federal property, I got to do what I got to do.

Personally I don't care how confident you are you should never take a neck shot on a deer. This is even stressed in our Hunter Trapper Ed classes. Yes a properly placed bullet will drop them where they stand but it is a small target and if you miss the spine you could be in for a long tracking job or a lost deer that will eventually die. A shot in the heart/lung area is a much bigger target and if placed low enough on the body will give you a decent blood trail and a dead deer at the end. I like to shoot for just behind the shoulder in the center-lower 1/3 of the body. That usually takes out the heart and the bottom of the lungs.

Reminds me of my short experience with a crossbow. Went hunting on Fort Sill Quanah Parker range. Was sitting in a lawn chair very close to a deer trail. A four point buck appeared but his body was not visible because of the tall grass. Not to worry, shot buck in the neck. Deer stood for about 30 seconds with the crossbow bolt protruding from both sides of his neck, then ran away.

Followed the sparse blood trail for a couple hundred yards. Heard a vehicle stop on the dirt road and drive off in about five minutes. Blood trail disappeared at the road.

Several days later i met an Army NCO who i was acquainted with on the same road. The drill sergeant had found a buck in the road with a "short arrow" in his neck. Me: "The short arrow had yellow and green fletching, you stole my deer". The drill sergeant said deer was at the processors and he would return same. Told him to keep the deer.

Couple weeks later i was sitting in a lawn chair over looking a pond when a large hog came to drink. Shot the broadside hog, he stood there with blood spurting out both sides then dropped dead. Watched my $12 crossbow bolt skipping across the pond. End of my crossbow career.

Why did you stop crossbow hunting? Because you lost a deer to a bad shot decision and after killing a hog lost a bolt?
Sorry but I don't understand your logic!
Sounds to me like although you were in a good spot in both instances but your shot selection/angle could have been different. You could have been at a higher vantage point in both instances and got both the deer and the hog and saved your lost bolt.

I've hunted with vertical bows for about 40 years and crossbows this last 9 years.
It's pretty much a given that I'm gonna lose at least one arrow per season. I think that 3 arrows lost one particular season was my record.
With the arrow and broadhead running about 15 bucks or so each, it gets expensive but not so much that I'll quit anytime soon.

i'll be hunting with my X-bow october 1st , No neck shots though .

Our season starts October 1st too.

I've only purposely tried a neck shot 4 times. Twice on mule deer running straight away, and I hit them both in the butt. Damn jumping deer. Once on an elk, when he was laying in his bed, and his body was obscured. That was only about 30 yards, and he just slumped over drt. The last one I attempted was on a small forkhorn looking at me over the brush at 75 yards. Through the scope, I saw hair blow off the side of his neck and he went down. Then got back up and ran. Several hours later, I caught up to him and dropped him with a second shot. The first shot had just barely grazed him, just barely broke the skin and blew off a 2 inch patch of hair. Overall, not a big fan of neck shots under most field conditions. Not at my skill level.

bronko220002 said:
Why did you stop crossbow hunting?
Click to expand...

Too much of a hassle. A crossbow is the most clumsy thing i've ever handled. A cocked crossbow cannot be transported: Got to uncock the crossbow by firing a blunt into the dirt or something.

When the stars align....

Finally got it done this year with my in-line.