What Bullet is everyone using ?

Idaholewis said:
My vote is, and always will be Bullshop. 1, Because i have hands on experience with them, They shot so Well for me that i sent an Original Bullshop Bullet to Accurate Molds and had it Copied, It is 1 of my TOP DOG .50 Cal Bullets. 2, Bullshop Dan is who Taught me the importance of Bullet lube, and how it can DRASTICALLY effect Accuracy, He wasn’t trying to sell me anything, He GENUINELY Helped me, Dan is a straight up good guy! And lastly, I weighed The Bullshop Bullets from Dan, They were All within 1 Grain of Eachother, Awesome Quality Control, Another BIG DEAL to me. If i am Gonna Burn the Powder to Test a Bullet, i want those Bullets to ALL be IDENTICAL to eachother

Open/Peep Sights, My Bullshop “Copy” Bullet, This Bullet will do this EVERYTIME out as long as i do my Part 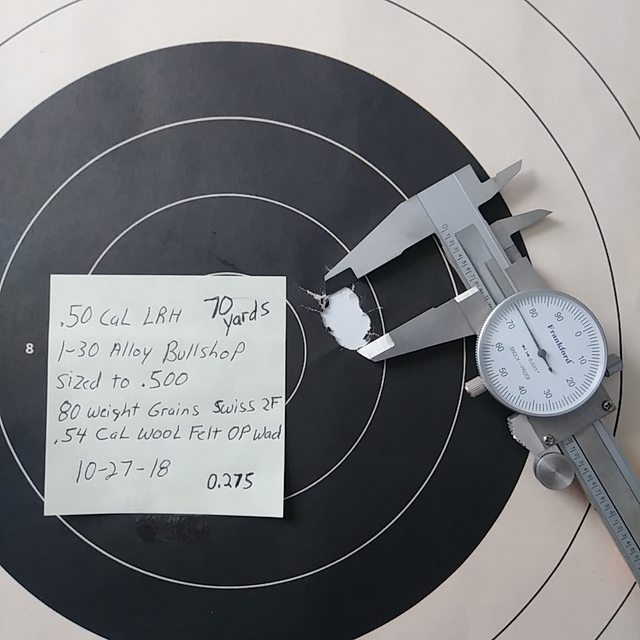 The ONLY experience i have with No Excuses Bullets is Doing a Lead Hardness Test on them, Which i did for 2 Concerned forum members here that sent me Bullets to Test with my Cabin Tree Lead Hardness Tester. In Short, The No Excuses had failed a Bullet Test here. Myself, and a few others suspected they were HARD (like an alloy) and NOT pure Lead, And that is PRECISELY what i found when i Tested them, There were HARD Bullets mixed in with Soft Bullets from the Same Box, Which is a BAD DEAL!! anyone that knows much about Lead Bullets, Knows this is HORRIBLE for Accuracy, Hard and Soft Bullets Can Group Differently, VERY DIFFERENTLY.

The Thread on the Above can easily be Found here, I even Did a YouTube Video on it. In the Video i show you how to Spot a “Hard” Bullet by the Sprue Cut.

In Defense Of No Excuses Bullets, Dave (Owner) Joined the thread and was More Than Willing to Replace Bullets that ANYONE suspected was Hard, and I believe he did so? He claimed to of gotten a Batch of Hard Lead by Accident? He was Willing to make it Right with Customers, KUDOS to No Excuses Bullets for doing that

If i were to purchase Lead Bullets from ANYONE, I would like to Know if they are Weighed, and Sorted? What Tolerance can I expect? Do you take care in Protecting the Bullet Bases? REMEMBER, It is the Bullet Base that Steers the Bullet, NOT the Nose! I personally Except NOTHING but PERFECT Bullet Bases. I was taught this By 2 WORLD Champion BPCR Shooters

There is a Reason That Buffalo Arms Ships Their Swaged, Cupped Base Paper Patch Bullets in these Boxes, They are INDIVIDUALLY Protected. What happens if Lead Bullets are Tossed in the Same Box and Allowed to “Roll around” and Bang against eachother? They get Dinged up! Buffalo Arms/Bitter Root bullets addresses that issue here 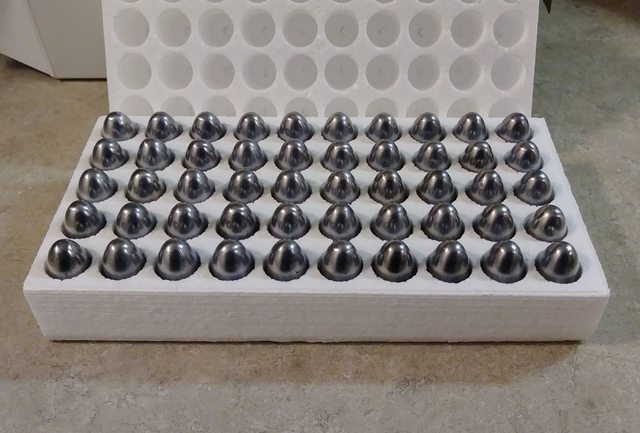 Thanks for the info!
I’ve been to bull shop’s website, and after being there I have no idea what he has or how to obtain it.i wouldn’t even know what style bullet to convey to him over a phone call.

I've had such outstand success with the XTPs that it was hard for me to try the Barnes this fall., but the Barnes did exactly what has been touted about them. The XTP's have pretty much been drop on the spot with only a couple exceptions. I'll stay with the Barnes in Accura until they give me a reason to go back to the XTPs. I'm trying to stay ahead of the anti-lead bullet movement, which I think is coming like it or not.

Regardless, this has been an interesting thread.

Slickheadhunter said:
Thanks for the info!
I’ve been to bull shop’s website, and after being there I have no idea what he has or how to obtain it.i wouldn’t even know what style bullet to convey to him over a phone call.
Click to expand...

I Agree! I have only purchased from them 1 time, and that was a Few years ago (I cast all of my Own Bullets) i ended up Emailing back n Forth with Tina (Dan’s Wife) They didn’t even have a Phone Contact then, maybe stil don’t? There was No way to Pay online, i had to Send a Money Order for the Product i ordered. So i FULLY agree that their Website was Not the Greatest. I haven’t been there in quite awhile, But doesn’t sound like it’s Changed?

If you take the time to get through to them, They are Good People, And offer AWESOME, TIME TESTED Products, Their Bullshop NASA Bullet Lube is the BEST Stuff i have EVER Used

When Making my Own Lubes, i am DILIGENT at trying to Mimic Their NASA Lube.

My Bore was .501, i was able to Shove the FULL Size Bullet Down fine, it was a TIGHT Push, Sized to .502 Would have Been Better, More pleasurable to Load

Slickheadhunter said:
Thanks for the info!
I’ve been to bull shop’s website, and after being there I have no idea what he has or how to obtain it.i wouldn’t even know what style bullet to convey to him over a phone call.
Click to expand...

Do they come pre lubed?

Slickheadhunter said:
Do they come pre lubed?
Click to expand...

Yep! At least they Did, You might ask to make sure? The ones i got were Lubed with his NASA Lube

This was a QUICK Short Range Test, 50-60 Yards with the Original Bullshop 460s WAY Back when i first Shot them 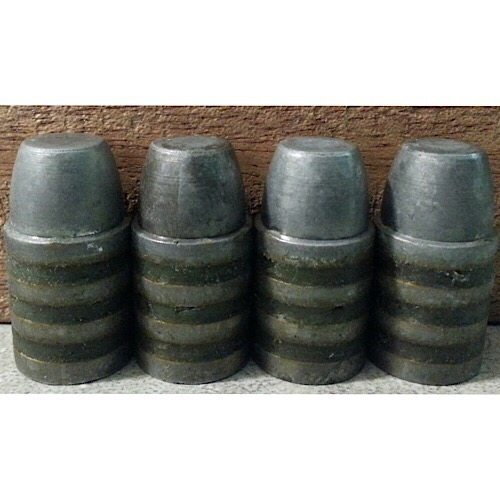 I shot this 3 Shot Group, saved the 4th Bullet to Send away and have it Copied, a Mold of mine Made

This was Shot with my Old Stainless 50 GM LRH, Open sights. This particular Barrel was FINICKY, But Came ALIVE with these Bullshop 460s

I have Since Shot this Bullet a LOT, it is definitely 1 of TOP DOG .50 Cal Bullets! Dan did a Great Job designing this Bullet, Mountain Molds here in Cottonwood Idaho is who Custom made it for him years ago 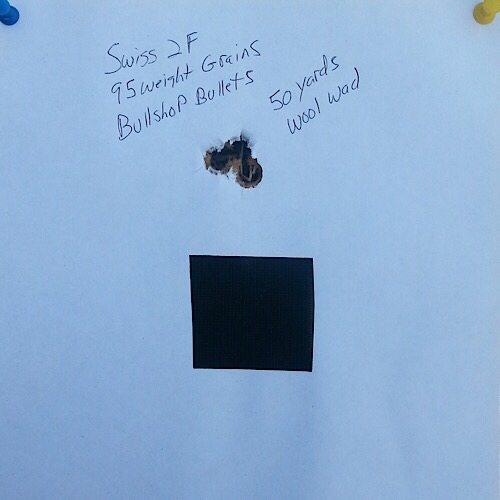 Have you tried shooting these without a wad? It becomes a little tedious while hunting

Slickheadhunter said:
Have you tried shooting these without a wad? It becomes a little tedious while hunting
Click to expand...

I shoot an 1/8” Wool Felt Wad with ALL of my Grease Groove Bullets, It’s a Step that I simply deal with

The ONLY time i have ever had Barrel Leading issues is when i Chose to NOT use a Wad Behind the Bullet. REMEMBER, The Bullet Base is What Steers the Bullet, Why Set Fire against it? Take the Extra Few Seconds and place an 1/8” Wool Felt Wad under the Bullet Base to PROTECT it 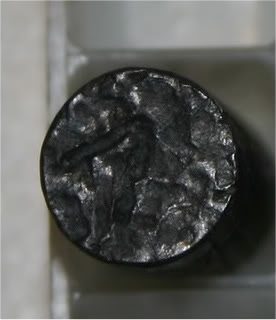 Take some lube or even a dab of melted beeswax. Toilet rings used to be beeswax. Put some on the base of the bullet and stick the wad to it. Alox holds a wad to the bullet just fine until heat from the powder melts it.
https://www.homedepot.com/p/Everbilt-Standard-Wax-Ring-1-007004/100211506

GM54-120 said:
Take some lube or even a dab of melted beeswax. Toilet rings used to be beeswax. Put some on the base of the bullet and stick the wad to it. Alox holds a wad to the bullet just fine until heat from the powder melts it.
https://www.homedepot.com/p/Everbilt-Standard-Wax-Ring-1-007004/100211506

that’s a great idea, I don’t mind prepping stuff ahead of time to hunt.
It’s kinda funny, my sudden interest in other Bullets for my setup came from going to powerbelts webste and noticing they don’t have their .444 bullet any longer.

Not sure how well it will work with a fiber/veggie wad as far as releasing when fired but it works fine for wool wads. IIRC i just used Alox. No need to heat it up. Its a liquid and then dries. Takes a little while for it to dry though. I used some small ammo boxes. Might have been 45acp boxes to store them.

I’ll have to try it.
My speed holders might not work with the wad end exposed, I’ll try it and see how it works.

flounder said:
I cannot think of a more sure way to get my ire up than when a bunch of dogooders start talking about banning lead bullets. The Minnesota study was slanted, they had their conclusions reached before even doing the study. The lead that messes people up is lead in the water supply or lead dust in the air. Then they bring up eagles and babies to tear at peoples heart strings. Cripes, there are more eagles killed by wind turbines than by ingesting lead. If they try to take my lead bullet away I will let them have it.
So there.....
Click to expand...

I feel ya... Just saying it's coming, esp. on public (Fed) lands... so probably smart to find alternatives that work.

You are right about eagles and other raptors and birds being killed by windmills, but problem of lead ingestion is real and appears to be more common than we thought. I wish we could do what the f*** we want and still keep our wild places and wild things, but with people still growing and developing and everything else shrinking, we can't.

I am an ex falconer and a raptor biologist, so I know a little bit and I do care about these things...
If I can do a little good, so be it... Maybe I am a "doogooder"...

Minn. study slanted? Maybe... Lead frags are in the meat, eat lead at your own risk... I don't because copper works for me... Probably get enough Mercury from the fish I eat... and enough glyphosate from everything else... and turning into an old woman because everything comes in plastic...
F

The study was using high powered rifles with velocities that exceed what us conical users are shooting at. As far as whether you are turning into an old woman, I cannot make that judgement based on the data I have available at this time.
F

When people in a hunting forum take the side of the anti's we are all in trouble.
T

Just care about the wild places we hunt and the wild things (whether hunted or not) as I care about hunting... I will hunt until I can no longer climb the mountain... Hunting is Conservation... Hunters will save hunting. If "anti's" need education, who will do it?... They just need to "know" what we know... We can all learn more and do better...

In my mind that is a extremely good bullet. Tremendous 'Terminal Performance' and a great 'universal' bullet for deer, bear, and elk

This is a picture of the slightly larger 300 gr Bloodline. The 275 is about the same thing but with less weight. 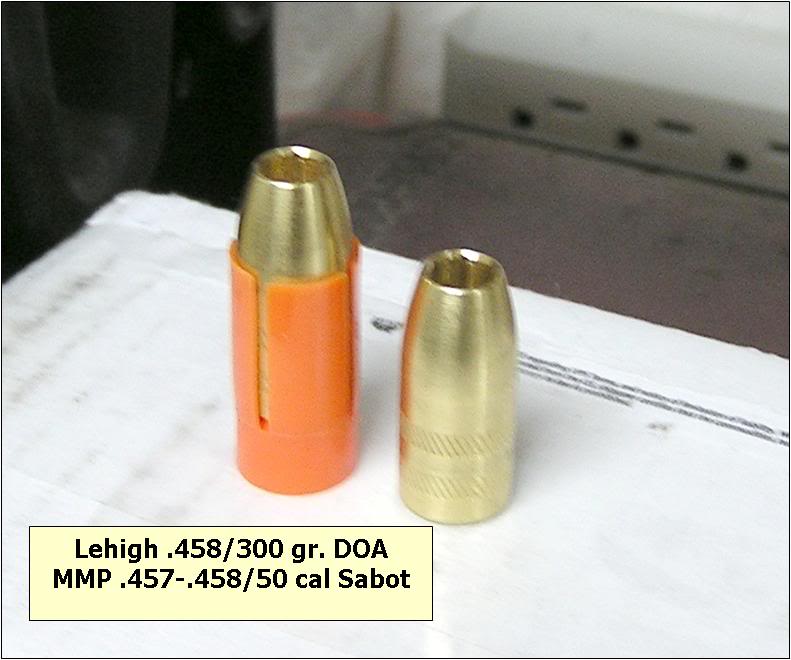 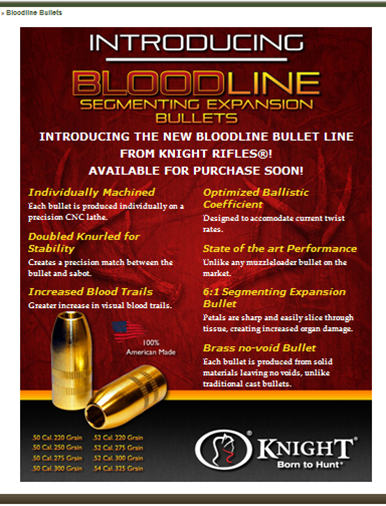