This ad below is on the Canadian site Gunpost.ca this morning if anyone is interested. Prices are in Canadian dollars. Please note the ad isn't me I Just saw it and thought it might be usefull for someone here. To find it go to the site and type Thompson Center Muzzleloader Stocks 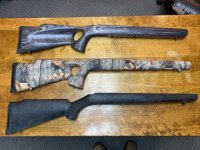 Sure do look like nice Omega stocks. Wish i could buy the two TH stocks. Bad timing for me.

I don’t know the seller but he has contact details and he’s prepared to ship. I have a laminate on my Omega, the none TH type. It’s the most comfortable of all my guns. Hence I didn’t buy the one in the ad.
D

"Gladly pay you Tuesday, for a laminated, thumbhole stock with a negative straight comb; inletted for a Jim Kibler, late Ketland, import English flintlock; with a 15/16" barrel channel that itself was inletted for a Rice, CNC, flint, .45 caliber, 1:14" twist, 15/16" straight oçtagon × 17" long, Thompson/Center, drop-in barrel".

Barrel's muzzle to be machined with 5/8"-24 threads for attaching a LR Customs MZ REX2 muzzle brake. Or, a knurled muzzle cap.

I could REALLY get on board with a stock design like that. Be just the ticket for what MtMonkey is looking for.

In my opinion, that's what sidelocks REQUIRE in order to entice inline shooters into the world of traditional muzzleloading. Once there with fast twist barrels, it's only a very short step away to a slow twist patched ball barrel. Especially, if the same company offers both types of barrels right up front in their advertising from the beginning. And, it's only another short step away from that, to a percussion/flint longrifle.

That’s not a bad idea. I reckon you can get an unfinished Boyd’s stock with no inletting.

I posted it because it’s a cheap stock even if you are paying shipping south.
H

I put a stock like these on my encore.. was only able to shoot it once ... never worked quite the same after.

I think those stocks in the ad are specifically meant for the Omega. Doesn’t the Encore hinge
W

I think you are right, the encore and contender come with two pieces ,stock and fore arm, and the Encore and the Contender have a hinge.
D

I sent an email to Boyd's to see if they would work with me, for additional money of course, to modify a rimfire thumb hole stock to work with a hooked breech barrel, flintlock sidelock set up. Basically, what I would want is the factory SS Evolution stock from the pistol grip & thumb hole rearwards, and left as a rectangular blank forward of that point to be later inletted by the gun builder for the hooked tang, the barrel, the underlug, the barrel key, the barrel key escutcheon plates, the push button sling swivel bases, the 2 Spartan brass gunsmith adapters, the single trigger, the trigger plate, the triggerguard; and drilled for the ramrod hole.

We'll see what their response is.

As close to a 13" L.O.P. with a Kick-eez Magnum recoil pad installed. Solid butt, instead of the factory normal hollow butt. Normal L.O.P. is 13.75" with a 1/2" thick recoil pad. In an ideal world I'd like to set the stock up with 9 GrovTec push button sling swivel bases. One on either side of the buttstock (2). One in the center line of the buttstock (1). One in the bottom of the pistol grip (1). One on the end of the forearm's center line (1). One on either side of the forearm approximately 1.5" to the rear of the forearm's tip (2). One on either side of the forearm approximately 8" in front of the trigger (2). This would allow for the use of just about any type of sling. Simple carry sling, Ching sling, Rhodesian sling, Riflemann sling, CW sling, any of the various tactical slings.
You must log in or register to reply here.
Share:
Facebook Twitter Reddit Pinterest Tumblr WhatsApp Email Link